Welcome to the first ever Silmarillion Awards!

The Silmarillion Awards have been created by DJ Edwardson and Jenelle Schmidt as a way to honor J.R.R. Tolkien as the Father of Modern Fantasy, open up a discussion about some of our other favorite fantasy works, and to have a ton of fun this summer.

When we started thinking about creating a sort of “Fantasy Oscars,” we found it difficult to fathom any award that wouldn’t be won by a character or item from The Lord of the Rings… so, to make things a bit more interesting, we decided to call them “The Silmarillion Awards” and have characters from LOTR and The Hobbit present the awards as examples of the ultimate standard for each award. Hopefully that will even the playing field a bit.

Joining our team are eight other bloggers and authors who will each be hosting one of these awards, called Silmarils, on their blogs towards the end of July. 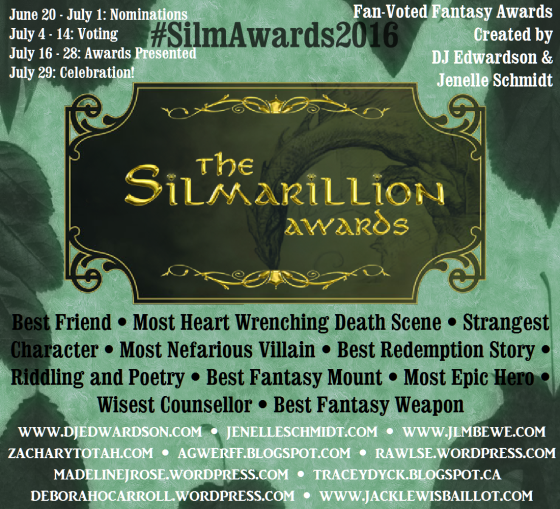 But before we get there, we need YOUR help! Starting today, June 20th and proceeding through July 1st, the nomination period for each award will be open. Please visit the participating bloggers (found in the list below), read the descriptions of the awards and make your nominations!

Nominate characters in the comments of each blog post. If someone has already nominated the character you would have nominated, you may either second that nomination, open a new nomination, or do both. We will be picking the 5 characters with the most “seconds” for the final voting period that will take place between July 4th – 13th, so you may also “third,” “fourth,” “fifth,” etc any nominations you particularly like.

Phase 2 – July 4: the final nominees will be announced and voting will open and last through July 14th

Phase 3 – July 16-28: Presentation of the awards, 1 per day, each award will be hosted on a different blog each day

Phase 4 – Celebration! July 29th was the official publication date of the Lord of the Rings back in 1954. We invite you all to celebrate with us the 62nd birthday of this masterpiece of Fantasy Fiction. Congratulate the winners, take and post a photo of yourselves with LOTR paraphernalia, write a blog post about your favorite LOTR moment, scene, character, quote, or memory… get creative and have fun!

List of Participating Blogs (Be sure to check them all out!):

As you can see, I will be hosting the Most Epic Hero Silmaril here on my own blog. Below are the criteria for the sort of character who ought to be nominated for such an award. Keeping in mind that LOTR characters will be presenting these awards as the ultimate standard of Fantasy Fiction

The winner of the Most Epic Hero Silmaril award should go to a character who absolutely blew you away in their awesome-ness. Who held you captivated from page one, kept you turning pages late into the night, had you thinking about them long after the book has ended.

This award will be presented to the character YOU vote for by one of the most impressive trackers known in Middle-Earth, an individual known by many names, and the rightful ruler of Gondor.

I hope you all participate and let everyone you know in on this fantastic ceremony that I was given the honor of participating in! 😀

Hey all! Another quick update for you…

Things have been a little rough this week, I was sick for a time, I had a bridal shower for my cousin, and basically life got in the way of things.

So…yeah. It’s pretty slow next week, though, so we’ll see what happens then. I hope to catch up and maybe even then some! 🙂

Just a quick update, things are going well, and I’m really happy with what I’ve written so far. 🙂

I hope you’re all doing well, in writing, reading, whatever it is you’re doing. Oh, and now that I’m on hiatus and I’m supposed to be focused on writing, guess what? Blog post ideas galore! Funny how that happens, huh? 😛